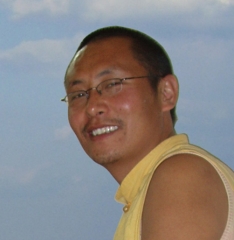 Doctor Konchok Bhauchung was born in 1979.  He became a Buddhist monk at an early age and studied Buddhist philosophy, arts and dance, and rituals.  In 1994, he entered the Drikung Kagyu Institute, founded by His Holiness the Drikung Kyabgon Chetsang at Dehra Dun, India.  There he continued his studies of Buddhism and also spent four years studying Tibetan language and literature.  In 1995, along with all the other senior monks at D.K. Institute, he participated in the six-month Chakrasamvara meditation retreat lead by H.H. the Drikung Kyabgon Chetsang.  In 1998, he and five other monks were selected by the Drikung Kyabgon to study traditional Tibetan medicine at the Chagpori Tibetan Medical Institute in Darjeeling.  In 2003, after five years of studies, he passed examination at the Tibetan Medical and Astrological College in Dharamsala, he and his classmates were granted a special audience by His Holiness the Dalai Lama.

After graduation, Dr. Bhauchung completed a six-month residency at the Men-Tsee-Khang clinic in Darjeeling and a five-month residency under Dr. Nyima Tsering at the Lhunkhang Tibetan Medical Clinic in Delhi.  Dr. Bhauchung has also completed courses in acupuncture and first aid.  He is currently a practitioner of Tibetan medicine registered under the Central Council of Tibetan Medicine.  In 2004, he returned to Dehra Dun to serve the Drikung Kyabgon, and since that time he has been working as a volunteer at Songtsen Library’s Medical Department, editing texts on Tibetan medicine in general and the Drikung lineage’s special medical tradition.  At the end of last year, Songtsen Library published the Collection of Drikung Medical Knowledge, on which Dr. Bhauchung had worked extensively.