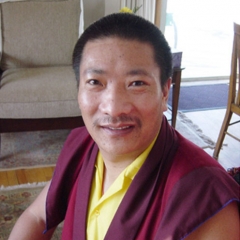 From an early age, Drupon Thinley Ningpo Rinpoche’s natural inclination towards religion developed into a determination to pursue higher spiritual studies.  With his father’s encouragement, Drupon Thinley entered Brong-ngur Monastery, and became a student of the eminent Buddhist scholar, Lama Kedrub Siddhi Rinpoche.  While studying at Brong-ngur, he met the great yogi and scholar, Drubwang Pachung Rinpoche in Drikung Thil, the sublime seat of Drikung Kagyü Order.  As a result, he had the great fortune to receive the profound essence instructions in the practice and mastery of the peerless Mahamudra.

In 1988, Drupon Ningpo went on a pilgrimage to the sacred places of Western Tibet and took advantage of a fortuitous opportunity to escape to India through an arduous and perilous two-month journey on foot across the Himalayas.  Once in India, he proceeded to the Drikung Kagyü Monastery and entered into the institute for higher education.  After completing his course of study, he was appointed dean of the institute, where he served with distinction for 6 years.  Over the ensuing years, he engaged in spiritual retreats involving practices of Five-fold Mahamudra and the Six Yogas of Naropa.

In the year 2000, Drupon Ningpo participated in the Drikung Kagyu Snake Year teaching and received the entire body of Drikung Kagyu empowerments, transmissions, and instructions for advanced practice.  In this body of Drikung Kagyu lineage, he earned the exalted title of Drupon, “master of spiritual attainment.” With this well-deserved distinction, he has now traveled to America and is responding to the sincere prayers of many people for authentic guidance in Buddhist practice.

Today, Drupon Ningpo tirelessly serves the dharma community from his home at the Tibetan Meditation Center in Gainesville, Florida.  As a visiting teacher, we are indeed fortunate to have access to him and his precious teachings.