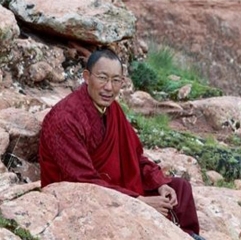 His Eminence Lho Bongtul Tendzin Nyima Rinpoche was born in 1965.  As a little boy, H.E. taught himself to draw, to do Tibetan calligraphy,and to paint.  As he got older, he calligraphed many lengthy religious texts like the Liberation Sutra and Drikung dharmapala texts.  At the age of eighteen, His Eminence Garchen Rinpoche performed the hair cutting ceremony, and H.E. Lho Bongtul Tendzin Nyima entered Lho Lungkar Monastery.  From Togden Drogon, a direct disciple of the previous Bongtul Rinpoche, H.E. received teachings on Dzogchen (Thoe-gal), Yangzab treasure teachings, and Drikung Phowa and did the 400,000 accumulations of Ngondro practice.

In accordance with Achi Chokyi Drolma’s prophecy, Togden Drogon recognized H.E. as the mind emanation of Lho Bongtul Rinpoche and announced the prophecy.  By that time, H.E. had already mastered all the religious chants, rites, and rituals of the monastery.

Later in life, H.E. received the most profound teachings on the Ultimate Tantra ground, path, and fruition and the “Blessings of the Continuum” from Drubwang Pachung Rinpoche.  From the meditation Master Gelong Tendzin Nyima, a principle disciple of Pachung Rinpoche, H.E. received many profound Drikung Kagyü teachings like the Six Yogas of Naropa and the Five-fold Path of Mahamudra.  H.E. received the novice ordination from Khenpo Sogtul Rinpoche in Drikung Thil and was given the name Konchog Tendzin Trinlay Thaye.  His Holiness the Drikung Kyabgon Chetsang subsequently recognized H.E. as the mind emanation of Lho Bongtul Rinpoche, and gave him the name Konchog Tendzin Sherab Jungney Pal-sangpo.

H.E. did a four-year retreat and other lengthy retreats on Yamantaka and Yangzab treasure teachings.  From Dzogchen Khenpo Thubten Namgyal, H.E. received profound teachings and empowerments on the Bodhicaryavatara, Uttara Tantra, sadhana teachings of the Eight Pronouncements, the “Embodiment of Realization”, Vajrakilaya, and Rigzin Jigme Lingpa’s “Highest Awareness” as well as many other teachings and pith instructions.

In 1997 H.E. received many teachings and empowerments from H.H. the Drikung Kyabgon Chetsang.  From H.E. Garchen Rinpoche, Dulmo Choeje, and Gyalpo Rinpoche, he received teachings and empowerments of the Five Treasuries of Jamgon Kongtrul containing the quintessence of all the Kagyu empowerments.  Once more H.E. went to Drikung Thil and sought the guidance of the meditation master Gelong Tendzin Nyima on specific aspects of the Six Yogas of Naropa and the Five-fold Path of Mahamudra.

H.E. introduced the yearly drupchens of the Eight Pronouncements (eight heruka sadhanas), the Assembly of Realization, the Embodiment of Divine Intentionality (gong-due), Vajrakilaya, and the Lho Lungkar Gon tradition of the Grand Mind Propitiation of the Essence of Great Bliss (Dechen Nyingpo).  He also introduced many deity dances to his monastery.  For the benefit of those presently interested and to meet the needs of future generations, H.E. has composed many sadhanas (method of practice of deities), texts on altar arrangement, histories, and a guide of sacred places of worship and has recorded three albums of Dharma songs.  H.E. also studied and practises Tibetan herbal medicine.

From time to time, H.E. has guided, taught, and given empowerments of the Six Yogas of Naropa and the Five-fold Path of Mahamudra to the monks and nuns of Gar Monastery, Khargo Monastery, Sichuan Tsele Monastery, Nyizong Monastery, Gewu Monastery, and to others who were on retreat.  In 1997 H.E. accompanied the Drikung Dance Tour around North America and Europe.  In 1998 H.E. rebuilt the historical stupa, Lungkar Chorten Bummo Che.  Among many significant accomplishments, H.E. has rebuilt Lho Lungkar Monastery and its retreat center.  Seeing the needs of the local population, H.E. built a medical dispensary and a school for the local children.

H.E. Lho Bongtul Tendzin Nyima is a scholar, painter, doctor, a singer-song writer, and above all, a Drikung Kagyu lineage master of outstanding insight, aptitude, and divine qualities.