His Holiness the Drikung Kyabgon Chetsang 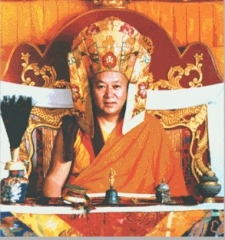 His Holiness the Drikung Kyabgon Chetsang, the 37th throne holder of the Drikung Kagyu Lineage and 7th reincarnation of the Chetsang Rinpoche is a manifestation of Chenrezig (Avalokiteshvara).

The Drikung Kyabgon Chetsang, Konchog Tenzin Kunsang Thrinle Lhundrup, was born on the 4th day of the 6th Tibetan month of the Fire-Dog-Year 1946 into the aristocratic family of Tsarong in Lhasa. This auspicious day marks the anniversary of the Buddha’s first turning of the Wheel of Dharma. Many prodigious signs and visions accompanied his birth. His grandfather, Dasang Damdul Tsarong (1888-1959), has been the favorite of the 13th Dalai Lama (1876-1933), Commander General of the Tibetan army and one of the most influential political figures in the early 20th century in Tibet. Chetsangs father, Dundul Namgyal Tsarong (b. 1920), held a high office in the Tibetan Government and he was still active in important positions for the Exile Government in Dharamsala after the escape of the Dalai Lama and the cabinet ministers. His mother, Yangchen Dolkar, is from the noble house of Ragashar, which descended from the ancient royal dynasty.

Few years after the passing of the previous Drikung Kyabgon, Shiwe Lodro (1886-1943), two parties began to look for his reincarnation throughout Tibet. Based on a vision of the Drikung regent Tritsab Gyabra Rinpoche (1924-1979) at the oracular lake Lhamo Latso and on many additional divinatory signs, in 1950 the son of the Tsarong family was recognized as the reincarnation of the Drikung Kyabgon. The boy subsequently passed numerous tests, such as identifying religious items and ritual objects of his former incarnations. His incarnation was further confirmed by divinations performed by Taktra Rinpoche (the Regent of Tibet), H.H. the 16th Karmapa Rangjung Rigpe Dorje, and H.H. Taklung Matrul.

In the fall of 1950, the formal enthronement as the Drikung Kyabgon Chetsang took place at Drikung Thil, the main monastery of the Drikung Kagyu order. Immediately thereafter the first Chinese invasion of Tibet took place. Rinpoche was allowed to travel to Kalimpong in Northern India with his family, in order to stay in a safe place. His older brother and his two sisters were attending boarding-schools in Darjeeling. After some months Rinpoche was met by a delegation from the Drikung monastery and brought back to Tibet.

According to ancient tradition, Chetsang Rinpoche resided in turns in one of the four main monasteries: In the spring in Drikung Tse, during the summer in Yangrigar, in autumn in Drikung Thil, and during the winter in Drikung Dzong, which also served as the administrative center of Drikung. His spiritual instructors (yongzin), Tritsab Gyabra Rinpoche and Ayang Thubten Rinpoche (1899-1966), were responsible for his education. His curriculum included reading, writing, memorizing, astrology, and grammar. From his yongzin and from Bhalok Thupten Chodrak Rinpoche, Lho Bongtrul Rinpoche, and Nyidzong Tripa he received the basic empowerments, transmissions, and teachings of the Kagyu tradition and the Drikung Kagyu tradition in particular.

At the age of eleven, Drikung Kyabgon gave his first public teaching and transmission, a long-life empowerment, during the 1956 Monkey Year ceremonies of the Great Drikung Phowa. Subsequently he began his philosophical studies at the Nyima Changra monastic college of Drikung. Although he was four years younger he studied together with the second Drikung lineage holder, H.H. the Drikung Kyabgon Chungtsang. His instructor was Bopa Tulku Dongag Tenpa (1907-1959), introducing him to the philosophy of Madhyamaka. He first studied basic texts, like The 37 Practices of a Bodhisattva by Ngulchu Thogme Zangpo and Introduction to the Bodhisattva’s Way of Life (Bodhicharyāvatāra) by Shāntideva.

Soon thereafter Tibet underwent a great upheaval. In the wake of the Tibetan uprising of 1959, as many Tibetans fled the country, among them the Dalai Lama, the cabinet ministers and a host of spiritual dignitaries, several attempts were launched to bring Chetsang Rinpoche and Chungtsang Rinpoche out of Tibet into safety. These attempts failed because of the inexorable resistance of the monastery manager. Rinpoche’s family had already fled to India in 1956.

The monks in the Drikung monastery were put under house arrest, and Chetsang Rinpoche had to endure with them for months Communist indoctrinations. After some month Tritsab Gyabra, who had left the monastery some years before, took Rinpoche to live with him in Lhasa under rather dismal conditions. In 1960, Drikung Kyabgon was admitted into an elementary school in Lhasa. In very short time he mastered the subject matters of several classes, being able to finish the six years of education in only three years. Thereafter he was admitted to the Jerag Lingka middle school. The subjects there included Chinese, natural sciences, history, and biology. Chetsang Rinpoche excelled in his studies, especially in Chinese. He also became a keen athlete and a passionate and brilliant soccer player.

When the Red Guards infiltrated the schools at the onset of the Cultural Revolution in 1966, Chetsang Rinpoche found himself caught up in the midst of the factional fighting of two opposing groups of Red Guards. Classes and business came to a halt. Many aristocrats and Rinpoches had to undergo brutal “people’s tribunals” known as struggle sessions. Chetsang could no longer stay with Tritsab Gyabra, who had fallen from grace. He lived at the school, where he cooked for the few remaining schoolmates and studied the books he found in the school’s library. Lhasa sank into chaos. In this atmosphere of anarchy Rinpoche several times was saved by a fraction from certain death.

In 1969, he was assigned to a commune in the countryside, where he had to carry out the hardest physical labor. A partly decayed verminous shack on top of a sheep pen was his shelter. He did not own more than a pot and a cup and some slats to sleep on. An uncle, who came to visit him one day, struggled against his tears, stunned that his nephew was living in such squalor. But Chetsang Rinpoche always reacted with great equanimity to all the many upheavals in his live. When the uncle became aware of the serene calmness pervading every aspect of Chetsang’s being, he compared him with Milarepa, who lived in comfortless caves and outwardly austere, but inwardly excessively rich spiritual life.

In the spring and in summer Chetsang Rinpoche drudged on the fields of the work unit. In autumn he had to climb high mountains to cut firewood for the commune and carry home heavy loads. In the winter he had to shovel out the sewage from the cesspits in Lhasa and carry it to the farm. Despite the strenuous labor, Chetsang helped others, whenever he could. Nobody knew that he was the Drikung Kyabgon Rinpoche, but his extraordinary deeds amazed many.

Due to his class background as aristocrat and high incarnate lama there was no prospect for Chetsang in Communist occupied Tibet. After meticulous planning, he finally found a means of escape in 1975. This was at a time when China had established a tight system of spies and informers all over Tibet and the military had a close grip of control, so that only few succeeded to take flight. He set out alone and without help to cross the border of Tibet into Nepal across high passes and glaciers. The Drikung Kyabgon accomplished what was thought to be impossible. Unscathed he reached Nepal and eventually the residence of the Dalai Lama at Dharamsala.

Rinpoche conceded to the appeals of the Drikung lamas in exile and so he was again symbolically enthroned as the Drikung Kyabgon during a ceremony with the Dalai Lama. By this act he expressed the promise to take responsibility for the lineage in the future. Initially though, he traveled to the USA, where his parents had in the meantime emigrated to. There he learned English, while earning his living as a part-time at a McDonald’s and other restaurants.

During the third year of his stay he received a very rare ancient Tibetan text uncovered in Nepal dealing with the history of the throne holders of the Drikung Order and written by his former incarnation, the 4th Chetsang Peme Gyaltsen (1770-1826). He started analyzing this work and studying the history of Tibet, of the Drikung Kagyu, and of his former incarnations. Shortly thereafter he returned to India in 1978, to take on the lead of the Drikung Kagyu Lineage as its throne holder.

For many years in occupied Tibet and in the USA, Drikung Kyabgon had outwardly led the life of a layman. Nonetheless he had always strictly kept his monk’s vows. Now he resumed his monastic lifestyle once again and took up residence at Phyang Monastery in Ladakh. Instantly he entered a traditional three year retreat at Lamayuru Monastery under the guidance of the stern meditation master Kyunga Sodpa Gyatso (1911-1980).

Drikung Kyabgon studied with numerous highly accomplished lamas and Rinpoches of different traditions and received from them teachings and initiations. He regards Dilgo Khyentse Rinpoche (1910-1991) as one of his most important teachers. He received from him the essential teachings of the Eight Practice Lineages of Tibetan Buddhism (Dam Ngag Dzo), the highest Dzogchen teachings (Nyingtig Yashi), as well as the collected writings of Jamgon Kongtrul (Gyachen Kadzo) and the treasury of the oral Kagyu transmissions (Kagyu Ngag Dzo). In addition he received precious teachings and empowerments from H.H. the Dalai Lama (Chakrasamvara, Kālachakra, and Yamantāka), from H.H. the 16th Karmapa (Six Yogas of Nāropa, Milarepa), from H.H. Taklung Shabdrung Rinpoche (transmission of the Taklung Kagyu teachings) and from H.H. Taklung Tsetrul the Northern Treasures. He studied Buddhist philosophy under Khenpo Noryang in the Drukpa Kagyu monastery Sangnag Choling in Bhutan, who gave him teachings on the Bodhicharyāvatāra by Shāntideva, the Madhyamakāvatāra by Chandrakīrti and on the Uttara Tantra. Khenpo Noryang also transmitted to him teachings of the general Kagyu tradition and the particular teachings of the Drukpa Kagyu on Mahāmudrā. Moreover Chetsang Rinpoche received important Drikung Kagyu empowerments and teachings on Mahāmudrā from H.E. Garchen Rinpoche and Drubwang Konchog Norbu.

In 1985, H.H. received full monk’s ordination from His Holiness the Dalai Lama, during the Kalachakra initiation in Bodhgaya. He mastered all challenges with remarkable ease. Since 1987 Chetsang Rinpoche began to give teachings in many countries throughout the world. At the same time he started to rebuild the weakened Drikung Lineage with great energy. In Dehra Dun, India, he established a monastery and an educational center, attracting many monks from Tibet and Buddhist practitioners from many countries: the Drikung Kagyu Institute. In the beginning it consisted of the monastery Jangchubling and the retreat center and nunnery Samtenling. The Drikung Kagyu Institute is an education center, which emphasizes both the traditional monastic education, as well as present-day training to meet the needs of these times. Special consideration is also placed on discipline, meditation practice and the specialties of the Drikung Kagyu teachings. In 2003 Chetsang Rinpoche established near his monastery a magnificent edifice: the Songtsen Library, a center for Tibetan and Himalayan studies. A building epitomizing in content, function and form the essence of his vision as a treasury and think tank for the cultural and spiritual identity of the peoples of the Himalayan region and of the Drikung Lineage in particular. It contains rare texts about all subjects of the Himalayan region, works on Tibetan culture, tradition and geography, and of course the Buddhist texts of all schools. It houses an important collection about the famous Dunhuang manuscripts unearthed along the Silk Road. There, an unimaginable wealth of texts in various languages dating from the 4th to the 11th centuries was discovered. The Tibetan corpus alone includes thousands of manuscripts of all kinds, including the earliest Tibetan medical drawing known at present. Thus these ancient texts provide the researcher with a vast array of source material on the earliest period of Tibet, which Chetsang Rinpoche would like to make accessible in its entirety, as his scope encompasses the preservation of Tibetan culture and religion.

In 2005 close to the Songtsen Library, Drikung Kyabgon built a large College for Higher Buddhist Studies, the Kagyu College. With its inauguration the new Drikung Mandala in Dehra Dun has been completed.