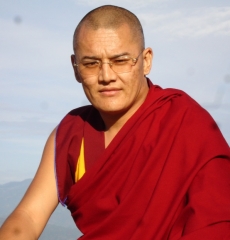 Khenpo Nyima Gyaltsen Rinpoche was born in 1976 in Sha, near Drikung in Central Tibet.  At the age of four he learned to read due to the kindness and care of his father and grandmother.  At age nine he entered the local village school and studied writing, math, and other subjects for four years.  During this time, when Kyabje Ontrul Rinpoche came to Tibet, Khenpo offered his hair and took the refuge vow.

In 1987 when he was eleven years old, he traveled to his homeland of Kham and entered the religious life at Lho Lungkar Ogmin Thubten Shedrub Ling where he studied ritual practices under the monastery’s senior lamas Gongyam and Drugsing for six years.

Then, in 1994, he went with Thubnying Rinpoche to Jangchub Ling in the Holy Land (India) where he took the novice monk vows from His Holiness the Drikung Kyabgon Chetsang.  For two years he studied the Essence of the Mahayana Teachings and the Single Intention under Khenchen Konchog Gyaltsen Rinpoche as well as the ordinary subjects and the major scriptures with the Khenpos and teachers there.  In the south of India Khenpo received the great empowerment of Kalachakra from His Holiness the Dalai Lama after which, according to the expressed wishes of both the Khenchen Konchog Gyaltsen Rinpoche and Thubnying Rinpoche, he went to Bihar to study the major scriptures for eight years.

In 1998 he received full monk ordination from Mewa Khenchen Thubten Ozer Rinpoche.  Since then he has received the oral transmission of the precious Kangyur of the Buddha from Choje Togden Rinpoche as well as the pig, snake, and monkey year teachings from H.H. the Drikung Kyabgon Chetsang.  At the beginning of 2002, H.H. the Drikung Kyabgon Chetsang authorized and instructed him to teach at the Kagyu College at Jangchub Ling and in 2004 enthroned him as a Khenpo of the College.  Then, in 2006, Khenpo returned to his own Lungkar Monastery to teach the monks and nuns of the monastic college, Jamyang Gatsel Ling, Gampopa’s Jewel Ornament of Liberation.  From among the ordinary lamas and monks of his land he was enthroned as a Khenpo.  Currently, Khenpo Nyima Gyaltsen Rinpoche resides at Jangchub Ling in India.