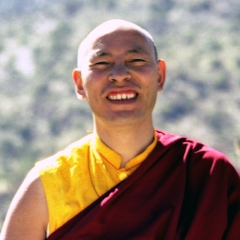 Khenpo Sherab Ozer Rinpoche was born in 1966 to his father Trithub and mother Luyang.  As a child in a nomadic family, he had no opportunity to attend school, and instead spent his days tending livestock.  He learned to read and write from his father and, having a passion for fighting, used to spend the entire day pouring over the Gesar Epic, full of battles and heroic warriors, as his herd grazed.

In 1985, after liberalizing reforms permitted some religious practice in Tibet, Khenpo Sherab Ozer took refuge vows from Daktrul Thubten Shedrub.  He then entered Drong Ngur Monastery, where he applied himself to learning the monastery’s particular ritual practices.  At this time, he completed the 400,000 accumulations of the preliminary practices under the direction of Khenpo Karma Tengye Rinpoche.  Following this he spent several years on pilgrimage during which he stayed in retreat at many remote places.  In 1987, Khenpo Sherab Ozer took full monastic ordination from Drubwang Pachung Rinpoche.

Starting in 1992, he studied the principal Buddhist scriptures with Khenpo Konchog Gyaltshen Rinpoche, Khenpo Togdrol Rinpoche, and Khenpo Kunmon Rinpoche at Drikung Jangchub Ling in India.  In subsequent years, while in Nepal, he listened to and contemplated the various classes of sutra and tantra teachings at the feet of Khenchen Pentse, Khenpo Chodzo, Khenpo Jadrel, and Khenpo Pema Gyaltsen.

As a result of his comprehensive studies, he was named an Acharya (“Master [of Scripture]”) and served as a teacher for two years at Ka-Nying Shedrub Ling, the monastic college attached to Chokyi Nyima Rinpoche’s monastery in Boudhanath, Nepal.  At the same time, Khenpo Sherab Ozer served as a teacher at Rangjung Yeshe Chetho, Ka-Nying Shedrub Ling’s sister college for foreigners.

Khenpo Sherab Ozer has devoted his life to serving the Drikung Kagyu lineage.  He is known for his crystal-clear, uncompromising presentations of the authentic Dharma and the loving care with which he guides his students.  He is an accomplished scholar and a skilled teacher, author, singer, songwriter, and sewer. He maintains an active teaching schedule in America, Europe, and Asia.