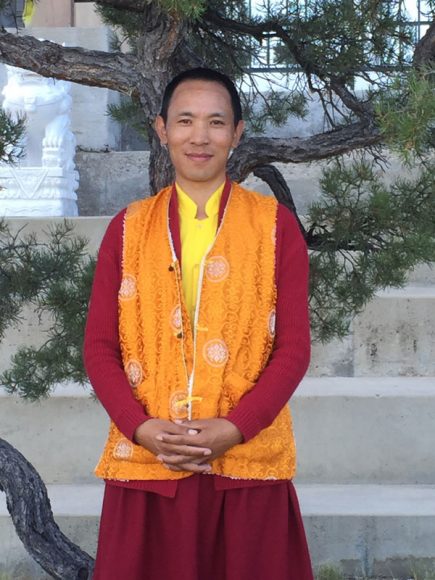 Raised in a large family in Eastern Tibet, Venerable Khenpo Tenzin’s wish to enter spiritual life was very strong from an early age. He was so motivated as a child that he taught himself to play the trumpet and learned many Lama dances himself, simply by observing and acting them out.

At age 9, he entered Gargon Monastery where he completed 5-Fold Mahamudra Ngondro practice and received recognition for his scholarly ability to memorize long dharma texts. One of only 8 promising young monks to enter Sertar Monastery, a very prestigious place of learning, he subsequently studied at Dzongsar Shedra. Later arriving in India, he completed his studies at the famous Gelug center, Sera Jey Monastic University.

In 2015 at the urging of HE Garchen Rinpoche, Lama Tenzin entered the U.S. He then studied & completed certificated courses in English as a Second Language & American Culture at the University of New Mexico in Albuquerque. At the 4th annual Drikung Kagyu Monlam, Lama Tenzin was recognized and awarded the prestigious title of Khenpo by both H.H. Chetsang Rinpoche and H.E. Garchen Rinpoche.