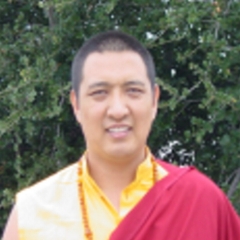 Khenpo Yeshi Rinpoche was born into a noble family in Kham, East Tibet in 1969.  From early childhood, he showed a deep interest in the study of Dharma.  Tibetan Dzogchen master, His Eminence Lungdok Rinpoche, as well as His Eminence Khenpo Könchok Gyaltsen took a personal interest in guiding young Yeshi and, at the age of thirteen, he was granted empowerments, transmissions and oral instructions in the cycle of sNying thig.

Arriving in South India at nineteen, Khenpo Yeshi went to Sera Monastery.  He continued to excel in his academic studies, ascending to the top of his Shedra classes.  Later, he entered Dzogchen Monastery in order to complete his studies in both the Sutra and Tantra trainings.

At the completion of his academic Buddhist studies, Khenpo Yeshi traveled to Nepal to undertake an intensive three-year meditative retreat under the guidance of the renowned Dzogchen master, H.E. Tulku Urgyen Rinpoche.  At that time, H.E. Tulku Urgyen Rinpoche granted Khenpo Yeshi special dzogchen teachings and personal instructions, placing him in retreat at Asura Cave Retreat Center in Pharping, south of Kathmandu.

In December 2001, Khenpo Yeshi arrived in the United States.  Since that time, he has participated in retreats at Lama Tharchin’s Dharma center, Pema Oser Ling, in Santa Cruz, California and at Garchen Rinpoche’s summer retreats held in Arizona.  He continues to instruct students both from Asia and America and currently attends university classes, studying English grammar and composition.  He currently resides at Gyatrul Rinpoche’s Dharma center, Orgyen Dorje Den, in Alameda, California.