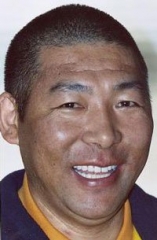 Venerable Lama Thupten Nyima was born in 1965 into conditions of political turmoil and exile associated with the Chinese Cultural Revolution.  Ven. Thupten Nyima had the good fortune to receive instruction at the age of fourteen on the effects of virtuous and harmful actions by the great yogi Tamga, and he completed the four hundred thousand accumulations of the preliminary practices (Ngondro) according to the Buddhist Yangzab terma.

His family having long been associated with Gar Monastery prior to the Cultural Revolution, Ven. Thupten Nyima made great efforts to travel to the Gar Monastery where he received refuge ordination from His Eminence Garchen Rinpoche.  He then received full monastic ordination and the bodhisattva vow from the great siddha Karma Norbu, and was admitted to the Gar Monastery.  There, he trained in the ritual practices of the tantras of Old and New Schools and other diverse religious activities.  He was selected for special training at Lho Lungkar Monastery, including the Eight Heruka Sadhanas, the Embodiment of the Masters’ Realization, Vajrakilaya, and Essence of Great Bliss.  He served as chant master and, later, as disciplinarian of the Gar monastery.

Thereafter, he received teachings from many of the great living Buddhist masters including Dzogchen trekchod and thogal from Khenpo Munsel Rinpoche, the entirety of the Drikung Kagyu protectors and the higher and lower tantra sections from H.E. Garchen Rinpoche, and received from Khenpo Jigme Phuntsok his own terma (mind treasure) of the Kilaya cycle of teachings.  At Drigung Thil, he received from Drubpon Tendzin Nyima some of the profound teachings of the Drikung Kagyu such as the Fivefold Mahamudra and the Six Yogas [of Naropa].  He studied the Gong Chig (Single Intention), Essence of Mahayana, The Bodhisattva Way of Life, and the Thirty-Seven Bodhisattva Practices with Drigung Khenpo Namzig.  Under the elder Drigung chant master Konchog Samten, he trained in the ritual practices of Chakrasamvara, Varahi, the Yangzab, Sarvavid and Akshobhya.

Thereafter, H.E. Garchen Rinpoche asked him to undertake a series of assignments to help reorganize and reestablish Buddhist practice and monastic discipline in monasteries throughout the region after, in some cases, a twenty-five year breach in the Buddhist practice tradition including Lho Miyel Monastery, Khargo Monastery, and later Tseri Monastery in Sichuan where he reestablished the Great Accomplishment (Drupchen) practice of Yamantaka and gave other teachings.  Then, again at the request of H.E. Garchen Rinpoche, he served as Lama (religious teacher and minister) for two years at Tamgo Monastery in Central Tibet, the former dwelling place of Chung Dorje Dragpa, the fourth lineage holder of the Drikung Kagyu.  There, Gape Lama established the summer retreat, set up a yearly teaching schedule, and appointed a chant master, disciplinarian and shrine master.

Subsequently, at Gar Monastery, Ven. Thupten Nyima took responsibility for instructing the nuns at the Fivefold Mahamudra Meditation Center of Gargon Nunnery.  In the year 2000 he went to India and received the complete Drikung Kagyu empowerments, transmissions and teachings during the Drigung Snake Year teachings.  Thereafter, he went to Singapore, Malaysia and Taiwan.  He then came to America to do a Yamantaka Retreat with H.E. Garchen Rinpoche, and served as the resident Lama for the Mercy and Treasure Buddhist Foundation in California.  At present, he serves as a Resident Lama and Chant Master for the Garchen Institute in Arizona, as well as continuing to serve as visiting Lama (religious teacher and minister) at the Mercy and Treasure Buddhist Foundation.  H.E. Garchen Rinpoche has also requested Ven. Thupten Nyima to serve as Chant Master (religious ritual master) all the Gar Buddhist Dharma centers in the West.